It's been more than 15 years since Mega Man first appeared on the Nintendo Entertainment System and there have been few videogame characters with as much clout and recognition as the Blue Bomber since. Though his exploits haven't brought in the same amount of financial gain that the old-school versions did, his cult popularity and status as an industry icon have continued to fuel a steady stream of updates and sequels without even a hint of slowdown. In 2003 alone, Mega Man has already seen five different videogame incarnations, with several more planned for 2004: including an eight-game anniversary collection, another installment of the Battle Network series, and an RPG spin-off of the X franchise. With numbers like those, it seems that there's no stopping this cerulean cyborg as he continues his quest to become the most overused personality in the entire digital medium. Gameplay One of the true innovators of the action/platform genre in the eight and 16-bit eras, Mega Man and Mega Man X have always been about combining difficult challenges, imaginative bosses, and impromptu strategies in one complete package. The real differences between the original series and the X franchise, however, is that the X titles have always been about storylines, upgrades, and technology. Where in comparison, the original line focused more on the RoShamBo-like approach to defeating stage bosses and its old-fashioned platforming elements. 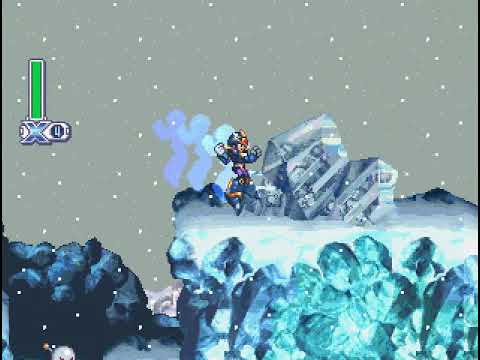 Staying true to form, Mega Man X7 is definitely more amalgamated with the ideals of the X lineage. Because to survive the battle here, you'll need to learn a wide range of skills and earn several different abilities to defeat the challenges that lay before you - and oh what a challenge it is. Graphics From a stylistic standpoint, the Mega Man X series has certainly seen better days.

As wacky as some of the locations are, the stage and character design is pretty generic by franchise standards and there's been better examples of artistry in the MMXversions of old. That said, the team at Studio 3 has still done a respectable job of moving the sprite-based world of Zero and Sigma into a 3D environment. As the robots themselves are made up of a healthy number of polygons and the pseudo cel-shading technique used for textures works pretty well. As mentioned in the gameplay section, though, the automatic camera system has more than its fair share of problems.

Extreme close-ups and bizarre perspective skews make navigating the 3D portions of the game particularly frustrating. Because of this, there are too many instances where players are attacked by enemies that they didn't even see or areas where they'll fall off ledges that weren't obviously cut short.

It's an occurrence that plagues just about every level, and one that creates more problems than not. Oh and did we forget to mention the slowdown? We should have, because that's in there too. It should be noted, however, that the anime cut scenes and manga-inspired story segments are nicely put together. While they're certainly not the best that the series has seen, they do offer up a nice diversion between stage goals and the poorly designed menu screens.